The ducks are marching one by one, hooray, hooray… OK, do that thousands by thousands, strutting around their barns on quaint Liberty Duck Ranch in West Petaluma. They are beautiful creatures: fluffy golden peeps as babies, then smooth, butter-yellow juveniles, and finally elegant, snow-white adults.

They nest in comfortable beds of straw in an open environment, free to go about their lives without interference, except at feeding time, when they are fed nutritious meals of corn and other whole grains.

And after they’re humanely harvested, their rich, hot-pink Liberty Duck meat is listed by name at dozens of high-end restaurants, including John Ash & Co. in Santa Rosa, Barndiva in Healdsburg, Della Fattoria in Petaluma, Terrapin Creek at Bodega Bay and The French Laundry in Napa.

When Jim Reichardt founded the family business in 1992, it was all about serving restaurant customers. Chefs were asking Reichardt, a fourth-generation duck farmer who had just parted ways with his family’s Reichardt duck farm, for a bigger, tastier bird. He introduced Liberty Ducks, a breed developed in Denmark and suited to a slower, less stressful style of parenting.

This slower rate of growth results in a meatier bird with exceptional flavor and a distinctive layer of fat under the skin, just enough to keep the meat succulent but still lean.

Diners loved the duck, but when the pandemic hit two years ago, many restaurants closed or turned to more casual options. So the Reichardt family (Jim, his daughter Jennifer Reichardt, and son Eric Reichardt) launched a new retail website and began selling their duck meat directly to home cooks. As the business spun, the entire team pitched in to make the deliveries. “We saw parts of the Bay Area that we didn’t know existed,” jokes Jennifer Reichardt. “So many houses, with stairs that go up to the top of the mountains.”

The Reichardts have found that sustainably-minded foodies are increasingly eager to cook with locally raised duck as an ingredient for home-cooked meals. That demand in home kitchens quickly led to the release of a new cookbook, “The Whole Duck,” which came out last month.

Some of the recipes feature fancy restaurant dishes, but others are simply personal favorites. Michelin-starred restaurateur Ken Frank of La Toque de Napa might not serve chili con duck at his restaurant, but he’ll share his recipe with readers and point out that it’s perfect for a big party.

“I think most people only think of duck a l’orange, and we have a recipe for that, but it’s a modern version, not so cloying and sugary,” says Jennifer. “And we’ve got duck nuggets, sliders, and Sichuan peppered duck tongue—fun, versatile things that are more than just confit duck thighs, but not complicated.” In the book, Jennifer also draws on her other career as an owner/winemaker at Raft Wines of Sonoma County to recommend drink pairings.

Duck has long been viewed as an intimidating chef’s meal, Jim says, something you’d order in a French restaurant but not necessarily cook at home. “Older generations would try to cook it like chicken at home, and it didn’t work,” he says. “They would overcook it, fill the house with smoke, and end up with this burnt-out mess.”

But anyone can succeed with the duck, he insists. Son Eric, while in college, received packages of duck meat from the family back home and prepared all kinds of dishes for his friends, some of whom were avid cooks and nature lovers. “Most of my friends had only eaten (wild) mallards that they had hunted,” Eric recalls. “They said, ‘Oh my gosh, this is such a different and richer flavor, more like a steak.’ And I didn’t do anything special to it…I just salt and pepper roasted the legs or made tacos on the stove.”

The Reichardts credit longtime restaurant patrons who have supported the family business for the past three decades. “We’ve never asked any restaurant to put our name on their menu,” Jennifer says. “It’s an honor that they decide to do it and believe in our product so much that they’re willing to tell everyone, ‘This is what we’re serving you.'”

From “The Whole Duck” by Jennifer Reichardt

Jennifer Reichardt of Petaluma-based family business Liberty Duck says this dish makes twice the amount of sugo (Italian for “sauce”) that you’ll need to serve four people. Freeze half the sauce for another meal, or double the amount of pasta to feed a festive crowd. “I am the first to say that there is nothing better than a table that is about to burst, since it is always full of love,” she says.

1 can (28 oz) diced tomatoes with juices

To make the sugo, place a large cast iron skillet or other large heavy skillet over medium heat. Shred the ground duck into the skillet and cook, stirring occasionally and breaking up the meat with a wooden spoon, until the meat is golden brown, about 15 minutes. Using a slotted spoon, transfer the meat to a bowl.

Return the meat to the pan, add the vinegar, and deglaze the pan, using the wooden spoon or spatula to dislodge any browned, crispy bits from the bottom of the pan. Add diced tomatoes, tomato sauce, orange zest (to taste), bay leaves, thyme, oregano, basil, and 1 teaspoon each of salt and pepper. Stir to mix well and bring to a gentle boil, stirring occasionally.

Reduce heat to low and simmer uncovered, stirring occasionally, until meat is very tender and sauce has thickened and reduced, about 30 minutes. (You can cover the pan and cook the sauce on low heat for up to 2 hours instead.)

Taste and adjust seasoning with salt and pepper if necessary. You will have about 8 cups of sugo. Transfer half to an airtight container, let cool, then cover and refrigerate for up to 4 days or freeze up to 2 months. Leave the remaining sugo in the pan and cover to keep warm.

Cook pasta in salted water according to package directions, then drain, reserving some of the cooking water.

Just before the pasta is done, reheat the sauce over medium heat. Add the drained pasta to the sauce and toss to coat evenly, loosening the sauce as needed with the reserved pasta water. Transfer to a hot plate or individual bowls, sprinkle with plenty of Parmesan cheese, and serve. 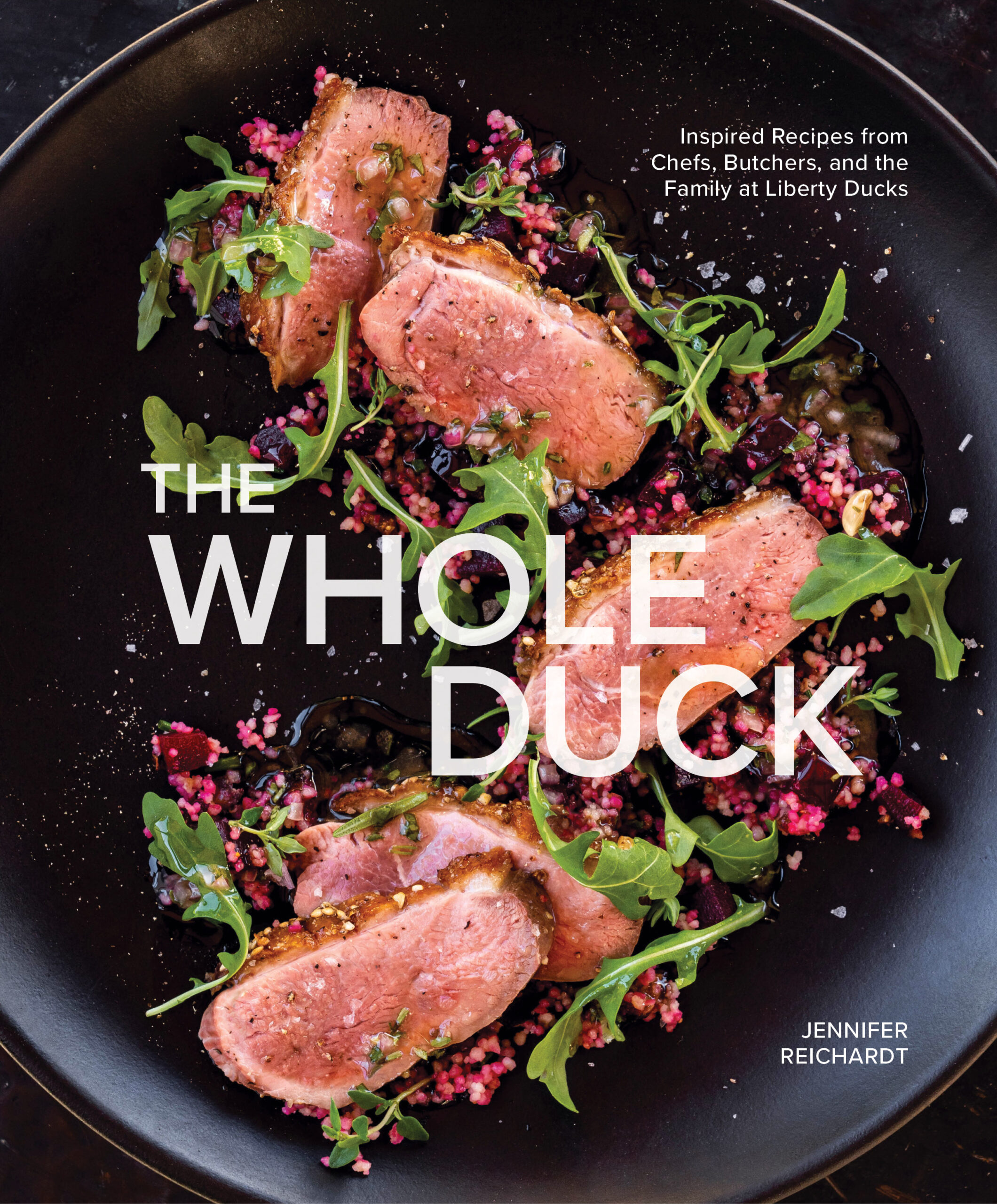 To purchase the new family cookbook, “The Whole Duck,” ($35) or to purchase Liberty Duck for the holidays, visit libertyducks. com. Also visit the website for a schedule of upcoming chef dinners featuring recipes from the new book.

On the website, you can order ground duck meat for the hot duck sugo recipe on the next page. Liberty Duck products are also sold at many local grocery stores, including Oliver’s Markets and Sonoma Market.

Ironically, you may not want to follow the directions on the Reichardt family’s holiday menu. After fulfilling seasonal special requests, there usually isn’t any of the prized poultry left for the family’s holiday meals. “We cook a lot of Dungeness crab, participate in the (Sonoma County’s annual) 4-H Heritage Turkey Project, and love big, juicy steaks,” Jim says.

And yes, he once tried to make a turducken, but says he’ll never do it again. “Why would you want a stuffed chicken inside a duck inside a turkey, and the skin never gets crispy?”