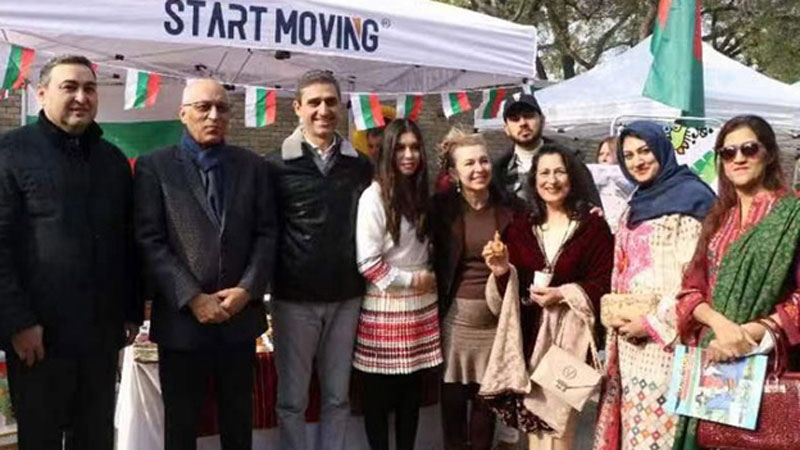 This year’s event was dedicated to the celebrations of 75 years of Pakistan’s independence. A portion of the proceeds raised during the event would also be donated to the victims of the floods in Pakistan. Ambassadors and senior diplomats, officials, representatives of the media and students along with their families participated in this cultural gala.

China, Iran, Egypt, Sudan, Bulgaria, Cuba, Bangladesh, Nepal, Kazakhstan, Azerbaijan, and several other countries exhibited their cultural crafts, products, and traditional cuisine. Pakistani Ambassador to China Moin ul Haque visited the stalls and exhibits set up by the students and their parents and thanked them for representing the handicrafts, food and culture of their respective countries. There were fun areas and a children’s play area.

There were also cultural shows from various countries that were liked by the guests. In his speech at the event, Ambassador Moin ul Haque thanked the school management and students for the successful organization of the event that had become the popular and flagship PECB event for the diplomatic and international community in China. .

He noted that PECB was the first and oldest international school in Beijing dedicated to providing high-quality education to the children of the expatriate community.

Moin ul Haque said that students are the future leaders of our nations and encouraged them to continue their studies with diligence, determination and honesty.

He thanked the diplomats from different foreign missions for their enthusiastic participation and also expressed his deepest gratitude to the school team and all who participated in making the event a success.

The director, Shazia Amjad, welcomed the audience and expressed her gratitude for their great interest and enthusiastic participation. Some exquisite dance performances with Chinese Sufi and Xinjiang music melodies, impressive Pakistani folk songs and a cultural dress show captivated the audience.

Pakistani food, traditional handicrafts and clothing displayed to highlight and promote Pakistani culture drew a lot of attention from the participants. Pakistani food and snacks were also a favorite item and attracted the attention of visitors. The ambassador and his wife cut a cake together with the principal, teachers and students to mark the special occasion. The students also received raffle gifts.