Lunar New Year is one of the biggest Asian cultural celebrations in the world. Kicking off the Year of the Rabbit on January 23, the holiday signifies new beginnings and the renewal of prosperity, happiness, and health. It is the time of rebirth and optimism. It is time to leave the past behind and anticipate a year full of opportunities.

The richness of Chinese culture comes from spending time with loved ones, and what better way to immerse yourself in the festivities than with food? Like all festivals, the grand Chinese New Year celebration begins with the preparation of lucky treats, which are eaten specifically during this time for their symbolic belief in bringing good luck for the coming year.

To get you in the festive mood, we’ve curated a list of delicacies eaten during this 15-day celebration, along with their meaning:

Steaming a whole fish is a surplus statement, often appreciated at the end of the year in the hope that it will attract more diners next year. The Chinese enjoy having a surplus at the end of the year because they believe that if they can save some, they will be able to earn more the following year. Carp and catfish are favored fish because their names resemble “good luck,” “gifts,” and “the excess of the year.” The fish should be steamed, and it’s fine if there’s anything left over, especially the tail.

To represent “oneness” and “wholeness” as well as a “great beginning and ending”, the chicken is often served whole, including head and feet. For a gathering dinner, chicken is often braised or grilled with basic seasonings like ginger or soy. Traditionally, a whole chicken is first presented to one’s ancestors and gods for blessings and protection. It is intriguing that the main breadwinner for the family often eats chicken feet because they might allow them to “grab” money (the word “grab” is a homophone of the chicken’s “claws”).

3. Chinese dumplings – a symbol of wealth 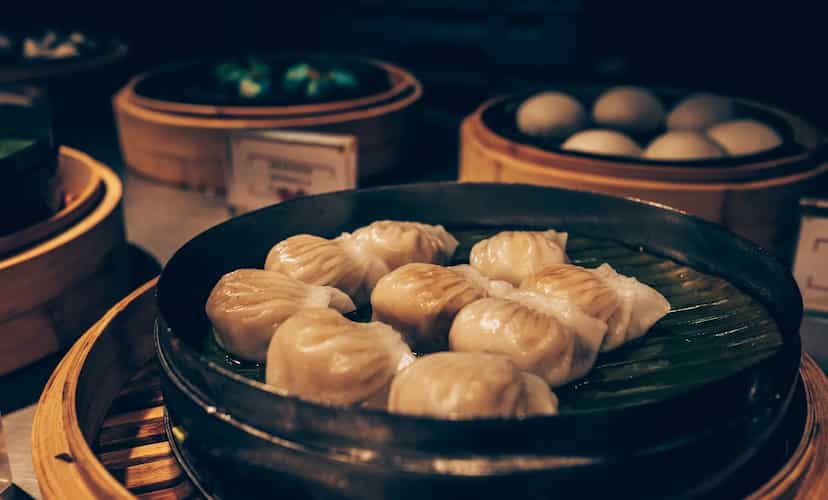 Dumplings have been eaten in China and Hong Kong for over 1,800 years and are considered a lucky food for Lunar New Year. You can make the Chinese dumplings look like Chinese silver ingots (which are not bars, but rather boat-shaped, oval, with both ends upturned). According to a Chinese folk tale, the more dumplings you eat to ring in the New Year, the more money you can earn. Typically, dumplings are made from finely chopped vegetables and minced meat that are wrapped in a thin, elastic dough wrapper. Minced pork, diced shrimp, fish, ground chicken, and vegetables are common fillings.

Four. Longevity noodles: a sign of longevity and happiness

Another essential food for Lunar New Year is long lasting noodles. These long, uncut wheat noodles are a symbol of long-lived hopes. We mean it when we say something is long. A noodle can grow to a maximum length of 2 feet (60 cm), and breaking one during cooking is not recommended. They can be stir-fried or boiled in a soy sauce flavored broth. You can add as many meats and vegetables as you want. Tang yuan, or sweet glutinous rice balls, are a symbol of family unity. Its name sounds similar to the term for “gathering”, and its circular shape represents unity. They often contain a sweet filling made up of peanut, sesame, or sweet bean paste. While white is the traditional “tang yuan”, variations in pink, green and orange also occur. They can be offered dry or in syrup.

“Nian Gao” or New Year’s cakes are a favorite for New Year’s festivities because its name is close to the phrase “top year”. The phrase denotes the optimism that the next year will be better than the previous one. These sticky rice cakes are delicious, and the most basic version is just sticky rice flour, sugar, and steaming water in a lotus leaf. Chestnuts, Chinese dates, and other fruits and nuts are potential additions. Cakes are eaten in the hope of bringing pleasure, prosperity, and good health.