Artist and Sweet Fix Bakery owner Amanda Robinson poses cross-legged on the counter of his West 10th Street store under dozens of full apothecary jars and begins to speak. Loves, likes, dislikes, ongoing ideas, past successes and disappointments, and future aspirations burst forth in a narrative almost like a stream of consciousness.

During a brief pause, I ask him if there’s anything he’s not doing right.

“I won’t wire a house,” he admits after a pause. “I would commit suicide.”

What Robinson does best, however, is create art. And while he’s masterful of traditional oil paints, brushes, and canvas, he also uses flour, milk, vanilla, eggs, and Italian buttercream to create amazingly detailed specialty cakes comparable to, or even superior to, those seen on shows. TV show about confectionery.

A Richmond native and 2004 graduate of the Savannah School of Art and Design, Robinson thought that after graduation she would move west and live a quiet hippie life doing art therapy for children. But her family and Virginia’s oldest fire station invited her back.

“I was very ambitious, I still am,” she says of her decision. “After I graduated, I came to Gallery5, which at the time was a fire and police museum, Steamer Company not. 5, run by a non-profit organization run by my father. In the 1970s, my dad saved the building from demolition. The city wanted to tear it down or turn it into condominiums. I lived there and we worked with the prison work release program to renovate and refit to save the building and the non-profit organization.”

Robinson had a deep connection to the building: his great-grandfather and grandfather were fire chiefs there, and many uncles were firefighters.

That year, Robinson recalls, he contacted RVA magazine’s creative director, Parker Galore, on MySpace just as they were about to launch their first issue. “He was going to do a story about the gallery, then we decided to join forces and do the first issue for him at our grand opening that same night,” he recalls. “Then, for the first few years, many events often coincided with the magazine.” 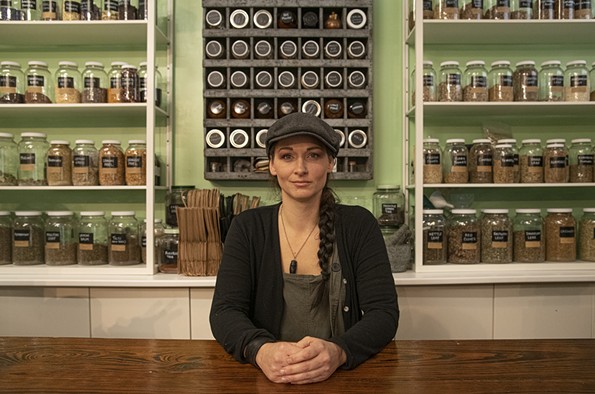 The call of creativity

“We got a lot of flak from the people involved,” laughs Robinson. “People were like, ‘ugh, Debbie Downers, why does everything have to be political?’ But I thought, if anyone has a voice to say something, it will be us.”

After the birth of her first child, Robinson says that all the years of spreadsheets, emails, fundraising, and especially exhibiting the work of other artists made her yearn for creating her own. So, in 2009, he began channeling his creativity to create cakes next door to his house.

“At Gallery5 I was behind a computer screen all the time,” he recalls. “I was writing contracts and not doing fun things. So I decided to leave to be my own artist.”

With increasing demand for her specialty cakes, Robinson decided in September 2015 to bake full-time, opening her bakery in a former carriage house in Manchester. There she was able to combine her artistic visions with her business and her extraordinary culinary skills in a style she calls “European meets South.” She though she admits that she now spends as much time behind a laptop screen as she does in the gallery, the consequence of running a company.

Handcrafted and baked from scratch with local and organic ingredients in constant consultation with the client, Sweet Fix’s culinary creations can be whimsical, majestic and even magical. In one creation, a silver horse made of lemon cake with Italian lemon elderflower buttercream sprouts from the third tier in a curved vertical oceanic splash of glass-like spun sugar.

Other presentations are almost like Warhol’s in their banal, everyday objectivity. For example, Robinson and his staff have diligently doubled on a cake: a container of Old Bay seasoning, a 40-ounce Miller High Life in a brown bag, a stack of comic books, and even a TV dinner. “I learn about the client’s style and vision through meetings in person and over the phone,” she explains. “I learn their event style, then lead them through various directions to bring that idea to life.” 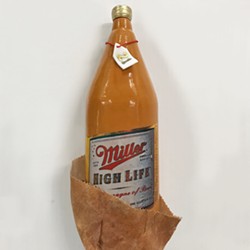 Every event is different, she says. “Sometimes I have to talk them out of really wacky ideas,” she adds, noting that one client brought more than 50 images to incorporate into a wedding cake. “I convinced them to use two or three because the cake has to have a theme and a focal point, or it won’t look right. I have to consider composition, color and design. It can’t just be everything; it would be a chaotic mess.”

Sweet Fix also spends many hours developing and creating all of the visual elements for their unique dessert tables, including pedestals, menu cards, favors, backdrops, even flower arrangements, to name a few.

After weeks of preparation and creation, she has no qualms about seeing her painstakingly detailed wedding, birthday and special event creations sliced ​​and devoured.

“I love the medium,” he says of creating art through pastel. “I love making cakes because it is part of an art form. You do it and it is consumed. It’s not like a piece of art sitting down and you’re like, ‘Oh, I really don’t want to look at it anymore. I could have done this differently, etc.’ It’s eaten, you have a photo of it, and that’s it. And it’s the best feeling to have an art form that exists like that.”

It also emphasizes that the cake has to look great and taste just as awesome. A recent wedding creation featured a sculpted and airbrushed dragon sitting atop two strikingly realistic books, “Battletech” by William Keith Jr. and “Earth Abides” by George R. Stewart.

“Those were the two books that meant the most to the groom,” Robinson explains after convincing clients to go from 40 books to just two. “I needed to make it look like they went through the wringer. The cover is edible wafer paper, and I had to go back and paint aged elements on it.”

During the pandemic, when business slowed, Robinson subtly turned her bakery from a “French patisserie with 1950s candy store” theme into more of an apothecary to reflect both the dark times of quarantine and her newfound interests in food. herbalist. . “I always wanted to better understand nature and plants,” he explains about the thematic transformation. “I went to school during the pandemic while running the herbal study space. Sweet Fix’s aesthetic used to be more geared towards what I thought people wanted to see, and I stopped caring about that and made it what I wanted it to be. So now it’s an apothecary, and you see a bit of my dark side intertwined in space.”

In keeping with that darker side, Robinson and Sweet Fix also featured [are featuring] their Nightmare Before Krampus pop-up at the bakery on December 2 and 3. They also sponsored [will sponsor] the start of the 10th anniversary of RVA Krampusnacht on December 2 at Gallery5.

While it seems obvious that Robinson and Sweet Fix could appear on national baking shows and very likely win (she gets an email invitation almost every week), she refuses to do so because she considers many of those shows to be dishonest. “I’ve been on a few shows, including Foodtastic and Baking Blizzard. But on a lot of those other shows, I think they cheat by sometimes using non-edible items like dowels, Styrofoam, and metal frames, and then placing edible items on top.” Every thing on her cake is edible, she says.

The shows also take about a month to set up, meaning the bakery would have to shut down while she and perhaps two of her employees waited 30 days or more in a California hotel waiting to be called, if at all. . “They don’t give a confirmation until the last minute,” she explains. “Most of the bakers you see participating in those programs are doing so full time. They quit their baking jobs to just compete.”

In the meantime, leaving the competitions behind, Robinson and his staff continue to create unique edible works of art, earning accolades from the national media and hosting First Friday pop-ups on that quiet Manchester block.

Sweet Fix is ​​open by appointment only. Anyone interested in inquiring about an event should complete the online inquiry form at https://www.sweetfixrva.com.