A HAZARDOUS photo shows a teenager smiling with his birthday cake 16 months before he was killed in a double stabbing.

Kearne Solanke, 16, smiled holding the personalized cake, which had his name in the frosting and was complete with candles, stars and crowns.

He was stabbed to death last night in Thamesmead, south-east London. Around the same time, Charlie Bartolo, also 16, was fatally stabbed a mile away at Abbey Wood.

Charlie’s heartbroken mother collapsed in grief at the scene today.

Police have launched a murder investigation and confirmed there is a link between the stabbings at Sewell Road, Abbey Wood and Titmuss Avenue, Thamesmead.

Horrified witnesses to the Abbey Wood stabbing watched as paramedics rushed to Charlie’s aid, but were unable to save him.

A Good Samaritan took in the victim’s devastated mother after watching her collapse.

Resident Lee Frazer, 55, said: “My relative peeked in and saw the mother who was so distraught being comforted by a neighbor last night. 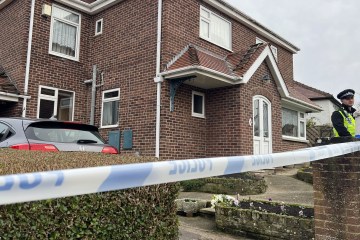 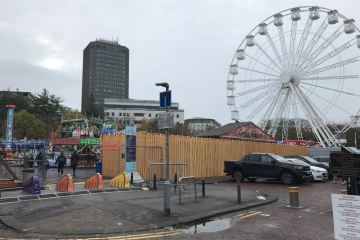 ”My neighbors welcomed her. In fact, she had collapsed on the pavement.

“There was a pool of blood and the young man was lying there.”

Another witness recounted how he heard screams.

Kirsty Bashford, 27, said: “I heard a woman scream but didn’t know who it was.

Most Read in The Irish Sun

“I looked out the window and saw the paramedics trying to save the boy.

“The boy was lying on the road and there were about three or four paramedics trying to do CPR.”

Flowers were left at the scene and candles were placed in the shape of a “CD”, the teen’s initials.

A floral tribute on the scene read: “Beautiful C, thank you for being amazing and making me smile when I worked on the link. I will never understand this world, rest in peace, Kim and family.”

Crime scenes remained at both locations Sunday morning with police officers guarding the cordoned off areas.

Several teenagers laid flowers by the cordon at the Titmuss Avenue scene where Kearne was stabbed.

Teresa Cheshire, who lives up the road, recounted her shock.

“I’m scared to let my kids out now. It’s shocking.”

Speaking near the scene in Thamesmead, Detective Superintendent Richard Mcdonagh said: “This is an extremely sad day for all of us who live or work in Greenwich.

“Police are investigating the tragic murders of two teenagers, and my thoughts and deepest condolences go out to their families and friends, and indeed to the local people in Abbey Wood and Thamesmead who I know are shocked and horrified by what happened. .

“I can confirm that the two young victims are Charlie Bartolo and Kearne Solanke.

“Their families are aware and we ask that their privacy be respected at this unimaginably difficult time. Specialist officers will ensure they receive all the support we can provide.”

“Homicide colleagues are investigating and are treating the two murders as if they were linked.”

“Officers are eager to hear from anyone who has seen a dark colored SUV or 4×4 type vehicle with distinctive silver roof racks in the areas around Sewell Road or Titmuss Avenue in the days leading up to and prior to the murders.

“Any witnesses, or those who knew Charlie or Kearne and could offer any insight or insight into these senseless murders, should contact police. The telephone number is 101 and you must quote the reference 4943/26nov.

“Information can also be provided to Crimestoppers, anonymously, online or by calling 0800 555 111. They do not ask for your name or track your IP address.”

Meanwhile, police have launched a murder investigation after a man in his 30s was killed in Richmond.

Police officers rushed to the scene around 4 am Saturday on reports of a fight and found a man with serious injuries.

Officers administered CPR prior to the arrival of paramedics before the man was taken to the hospital, where he later died.

Last month, a 32-year-old man was stabbed to death near London’s Waterloo station at night.

And the footage showed the moment three heroic bystanders were stabbed while trying to stop a robbery in the capital.

Members of the public also heroically stopped a knife-wielding man outside an M&S in Paddington, west London.